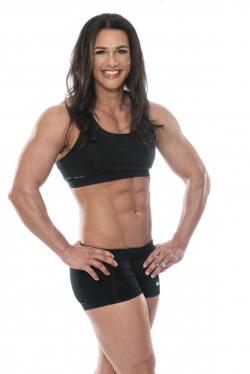 Having been an avid athlete since grade school, it was an easy career choice for me to pursue personal training as an adult. I began cultivating this passion in 2004, and found such satisfaction in helping others to achieve their personal fitness and health goals that I haven’t looked back since. This isn’t just a career for me. This is a lifestyle choice, a passion, and an honor that I take very seriously.

In 2014, April earned her IFBB Pro status in Women’s Physique at the esteemed NPC National Bodybuilding Championships in Miami, Florida. This is following her performance at the NPC Southern States Championship in July 2014 where she placed 1st in Women’s Physique Master’s, 1st in Women’s Physique Open, and took 1st place Overall for Women’s Physique. In her first show, the 2013 NPC South Florida Competition, she also placed 1st in Women’s Physique Tall and 1st in Women’s Physique Overall. Even in these early stages, she’s being compared to notables such as Dana Linn Bailey, and has been encouraged by industry professionals to continue her career in this area. By incorporating all of these experiences into her programs, she has provided well rounded, effective methods of training. She has had the pleasure of including Abercrombie & Fitch models, Miami Dolphins cheerleaders, Hollywood celebrities, individuals prepping for fitness and bodybuilding competitions, individuals prepping for the FBI Physical Fitness Test, and Police Academy applicants amongst her clients, as well as scores of other men and women on the journey of accomplishing their personal health goals. April has helped them ALL transform their bodies into the best they can be.